Soragna and its surroundings

The history of Soragna goes back to ancient times and the area was inhabited already in Neolithic times. But it is with the arrival of the Longobards that the name Soragna appears for the first time in 712 A.D. in an official document.

Towards the end of the XI century two families install themselves in Soragna in order to seize the fertile land. These were the Pallavicino, already Lords of Busseto, and the Lupi of Cremonese origins. The contest between the two families after many vicissitudes saw the establishment in Soragna of the Imperial Fief of the Lupi Marquis.
In 1385 a document signed by Giangaleazzo Visconti authorised the family to build the fortified castle that we see today.

In 1514 with the death of Diophebo I Lupi, the senior branch of the family became extinct and the fiefdom passed to a great nephew Gianpaolo Meli as designated heir giving rise to the present family, Meli-Lupi.

In 1530 the Emperor Charles V confirmed investiture on Gianpaolo together with privileges for himself and his successors and gave permission for the surname Lupi to be joined to Meli.

In 1709 the Emperor Joseph I nominated Giampaolo IV Meli-Lupi a prince of the Holy Roman Empire and so Soragna became a Principality of the Holy Roman Empire: an autonomous state with the right to produce its own money which removed it both from Spanish domination and from the sphere of interest of the Farnese who were intent on annexing Soragna to the Duchy of Parma and Piacenza. With the coming into force of the Napoleonic code on Ist July 1805 the feudal judicial and administrative entity came to an end as administration of the territory passed to the Municipality with a Mayor nominated by the government at its head.

The Meli-Lupi family continued to reside in Soragna managing their vast properties. Still today a member of the family lives in the fortified castle; Prince Diophebo VI who, by opening the splendid rooms and halls of this magnificent palace to visitors and important cultural events, has rendered it no longer a mute spectator of its glorious past but live protagonist of both the present and future of Soragna.
Today there are about 4000 inhabitants in Soragna most of whom live in the town and in the surrounding villages Diolo, Carzeto and Castellina.
The municipality extends over an area of about 47 square km and is entirely in the plain at an altitude of 47 m above sea level. Three rivers cross the territory, the Stirone, the Rovacchia and the Fontana which run parallel North to South.

Looking at Soragna today we can see architectural elements dating from the XIV to the XIX century which are in need of restoration. Many of these buildings were built through the largesse of the feudal lords.
The Rocca or fortified Castle is justly famous; built in 1385 the“impregnable fortress”   as it was called is rich in fresco decorations and furnishings all the work of celebrated artists. In the town can be found the Church of the Blessed Virgin of Carmine with the Carmelite convent: built in the second half of the XVII century it is a rare example of harmonious architecture. In the main square is the Oratory of St. Anthony of Padua, a baroque jewel built to a design by Francesco Galli called ‘Il Bibieno’ at the end of the XVII century.

A little further on towards the castle can be seen the monumental Sanctuary of the Holy Family: built between 1755 and 1769 by merit of Don Giuseppe Mazzieri in its precious interior can be found a wooden statue of the Madonna by Lorenzo Aili and an important Serassi organ.

The flourishing Jewish community which settled in Soragna since the XVI century built an important synagogue decorated in the neo-classic style. It can be visited today together with the next door Jewish Museum.

The town centre is between the historic Meli-Lupi park and the Remembrance gardens, and the tree lined avenues confer on the town a park like atmosphere conducive to discovering Parmigiano Reggiano cheese, Culatello ham and other gastronomic delicacies. Here in Soragna can be found the Museum dedicated to Parmigiano-Reggiano cheese. 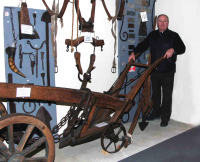 “Museum of peasant civilisation” is located very close to Parmigiano Reggiano Museum and takes place in a building of the ancient farm “Castellazzi” property of Meli Lupi family. The Museum was open in September 2003.

The Museum of Olive Oil Agorà Orsi Coppini is located in Podere Fieniletto and in a former dairy of XIX century specialized in the processing of Parmigiano Reggiano.
It became the set of a recovered culture, which has been brought back to his land after about a thousand years: olive growing.

Read more about this museum